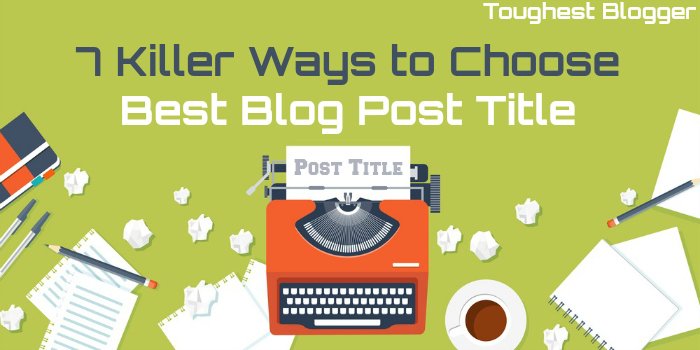 Content was king, it is still king and would most probably be king for years to come. However, if you don’t have an eye catching post title, you should expect no one to click on your blog post if somehow your post appeared in the Google SERP’s. So definitely Title does a lot for your Blog post and while creating, it needs as much attention and care as your whole post body.

So let me show you the 7 simple and easy ways to choose the best blog post title no matter in what niche you are. These are proven tricks and they always worked for me in my early days of Blogging.

This type of posts are also called List Posts. The numbers are always attracting to readers just like you were attracted to this pots. I would say, this is the best answer for How to chose a best Blog Post Title. Adding a number in Blog Post Title and than putting the content the way your title is, can give you better results.

2. Tease Your Readers but Just a Little Bit

Keeping your title a little teasing will also help. For this trick, you need to write such a title that points slightly to something but doesn’t clarify if it really happened. For example “Did Michael Jackson really die ?” . Now every body knows he is actually dead but as someone looks at this title, his mind would be cringed.

And S/He won’t have any other options but to click. Imagine that someone shares your article with his Facebook buddies, many of them would arrive to your article and if they share , there would be continuous flood of traffic that is going to continue , maybe for months.

Don’t worry it’s free and for everyone. Just go there and put some imaginary titles into it, that you would like for your next blog post and see the results. I would suggest you to chose the highly searched keyword with low competition.

Once you select your Keywords, put them in first or Middle part of Post title because this what Google considers more important while matching the SERP’s to someone’s queries as compared to the last part. However, putting the keyword in last part of Title will still be better than not putting that word anywhere in title.

5. Has Anyone Already Talked About This ?

Do a Google search and see if there is already an article on the same topic is available. After that you have two options. If same title is already being used, change your title because if you don’t , you may not get better rankings than that person. But If that title is not in use, go for it before someone else does.

6. Keep it Descriptive but Short

This heading says it all. The shorter and descriptive your title is, better would be your SEO and there are more chances that people will click on your article. While on the other hand, a long title can describe things more easily but it kills the SEO badly and also makes no sense at all.

However, having a very very short title is harmful as well because it won’t pick any one’s attention and there are less opportunities of putting your Keyword into that..This where you have to be in middle area.

You should be able to draw a lot of things from your most popular things. You can see how was it titled and what Keywords you used and what was their Placement.

Hence deriving a title from your most viral post can give you a hope of another popular post . So try to do better things this time, learn from your old post and mistakes and make a better and most Popular Post.

Let me know what do you think about Killer Ways to Choose Best Blog Post Title and what methods are you using or used as beginner.